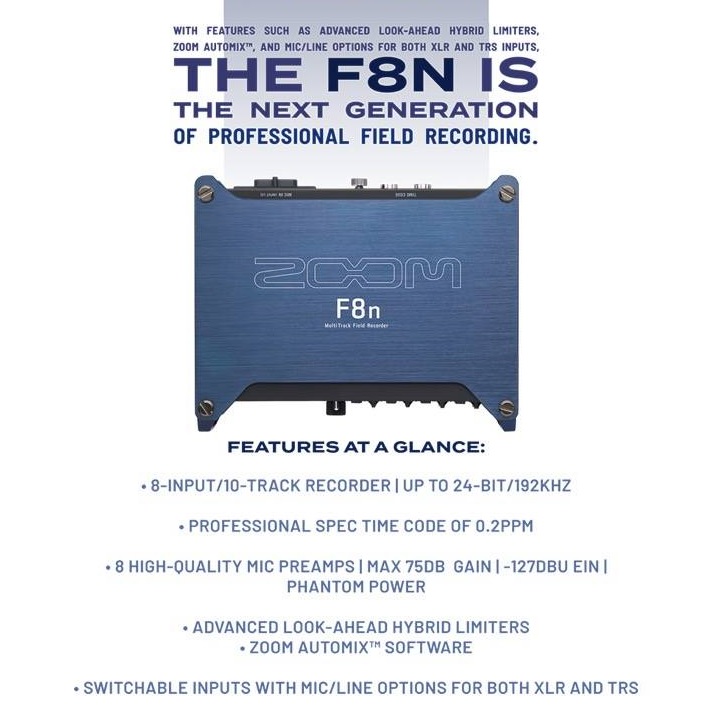 Currently I am very excited about the brand new Zoom F8n which just got announced, as you can see from the blurb it has some amazing specs, all for only US$999! (same price as the original F8 at launch, and cheaper than the indicated US$1200 when Zoom announced at NAB 2018 that a F8n was in development) However not everyone seems to be as happy about this as I am.

In response to people complaining that their original F8 doesn’t have all the bells and whistles of the F8n and asking if their F8 will get updated to this as well (it might? But I wouldn’t hold your breath), I wrote up this somewhat lengthy response:

The F8 original has had three years of excellent support from Zoom in updating it. I feel that is a perfectly reasonable level of support, better than that even!

Plus there is the possibility the F8n has a more powerful processor in it than the F8?? So maybe the F8 is not even physically capable of all of the software features of the new Zoom F8n?

Here a few of the highlights:

Trim knobs can be used as faders

Those are some big BIG UPDATES there! And that isn’t even all of it from the v2.0 firmware update.

Adding a TONNE of extra functionality to be used with the new FRC-8 and a keyboard.

And this is not even counting the many smaller updates between the big updates, which further improved the F8 during its lifetime.

I feel buyers of the F8 when it came out have been served very very well by Zoom, and I can only hope I get a similar series of updates during the lifetime of the Zoom F8n! 😮  I wonder what the future holds for the F8n?  I certainly have some hopes for Zoom F8n which might still come to pass.

Seems like it was only yesterday that I was  unboxing the Zoom F4. But actually it was in late 2016 when the Zoom F4 was announced (and I very shortly afterwards purchased, been a great upgrade from my previous Sound Devices 552 / Tascam DR680 combo).

2 thoughts on “Three Years of Firmware Updates for the original Zoom F8, what does the future hold for the new Zoom F8n?”