Wrote up a little guide for people new to this and looking to buy their first recorder as a location sound recordist. And is the way I see the world of low budget recorders is they’re ranked like this (starting from worst/cheapest to best/expensive):

Tascam DR22WL / Zoom H1 (I’d suggest skipping right over this tier of recorders! But hey, my first ever short film I did years ago was with a chinese shotgun running straight into a Zoom H1!! 😮 Shocking but true… everyone starts somewhere!)

Tascam DR60D mk2 (the DR60D mk1, before the mk2 came out, is what I myself started out using for no budget shorts as a budding location sound recordist)

Tascam DR70D (the *minimum* I’d recommend for a location sound recordist, even if you’re just a student / no budget guy. Although in desperate cases, you could scrape by with getting the DR60Dmk2, but doing the opposite and stretching for an F4 is very worthwhile. Certainly, I could travel back in time I’d just have gone straight for the Zoom F4 from the starts! *Except* the F4 didn’t come out until a few years later… you live in a very lucky time with so many wonderful options to choose from!) or Tascam DR680 (these can be found at bargain prices secondhand, which is what I did before I then later on purchased a Zoom F4 once that came out & I spotted an F4 at a good price)

Zoom F4 / Zoom F8 / Sound Devices MixPre6 (I skip right over the MixPre3, as the MixPre6 is very similar yet does so so much more at only a relatively small extra cost. Also I regard the three of F4/F8/MixPre6 as all on broadly the same level to each other, just varying slightly from each other in one area or another that ones might have a small lead over the other one. This is the tier where I’d see you’re now reaching the semi-pro level)

Sound Devices 633 / Zaxcom Maxx / Sanosax SX-R4+ (finally you have now got up to the “industry standard” when it comes to recorders people use for small shoots, especially when mixing from the bag. If you’re doing this full time as your job or hiring someone who is, then likely this is what is being used. Either that or similar gear, or even something better above this)

And if you considering ones priced above those last three…. you’re surely doing this full time as a sound recordist and getting a healthy income from that, so why are you asking us here on Frugal Filmmaker? ha! 😛 But yes, tonnes and tonnes more options exist at the higher end as well!

Finally, if you’re considering something in the budget range within what I just covered, but isn’t one of those that I mentioned, then it probably is *not* a good idea to buy if you’re intending to be a location sound recordist.

Something else only might *maybe* make sense if you’ve got in mind some other purpose for it, such as perhaps you want to record a band in a studio (which has very different needs / constraints), or you’re the rare exception which proves the rule, or you are getting lucky finding some amazingly priced deal which can make an otherwise bad purchase decision then make sense if “the price is right”.

For instance I didn’t include the Roland R88, as I feel it is extremely poor value for money in 2017! However…. there was a time at the end of 2016 when the Roland R88 got a huge price drop because it was being discontinued. Even with that massive price drop, the Roland R88 probably still wasn’t a smart purchase vs the Zoom F8, but the big drop in price at least made the R88 a somewhat competitive option worth mentioning in a round up of all the various choices. However, that sale is now long since ended, and the prices I see on eBay for a Roland R88 is even higher than what you used to be able to buy it new from B&H Photo! Clearly those eBay sellers are dreaming.

Anyway, that was just one example which might have been applicable but isn’t now, so I don’t rule out the possibilities of something like that perhaps popping up again in the future especially if you very keenly look around for secondhand deals. But for over 95% of people reading this, that won’t be applicable, and just stick to going with one of the main ones I mentioned earlier.

Such as my favourite, the Zoom F4: 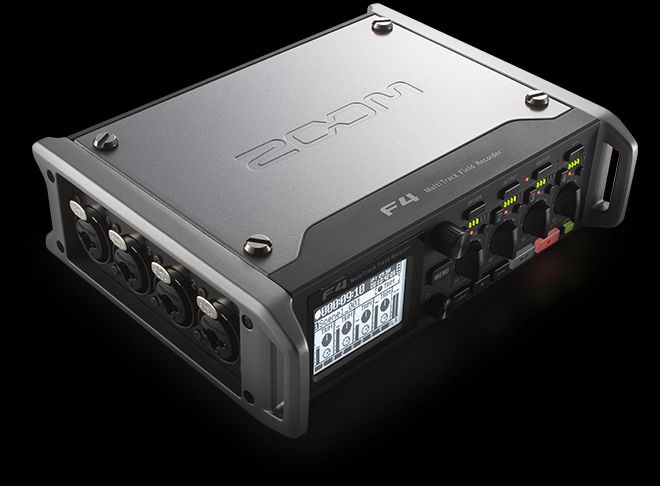 Also worth a look, if you’d like an overview of the specs of some higher end recorders as well, is this guy’s blog post:
http://rtsound.net/professional-field-recorder-comparison/

6 thoughts on “Which Sound Recorder to buy? A guide to various indie priced sound recorders in 2017”